Tilting at PTSD and Chasing Rainbows. 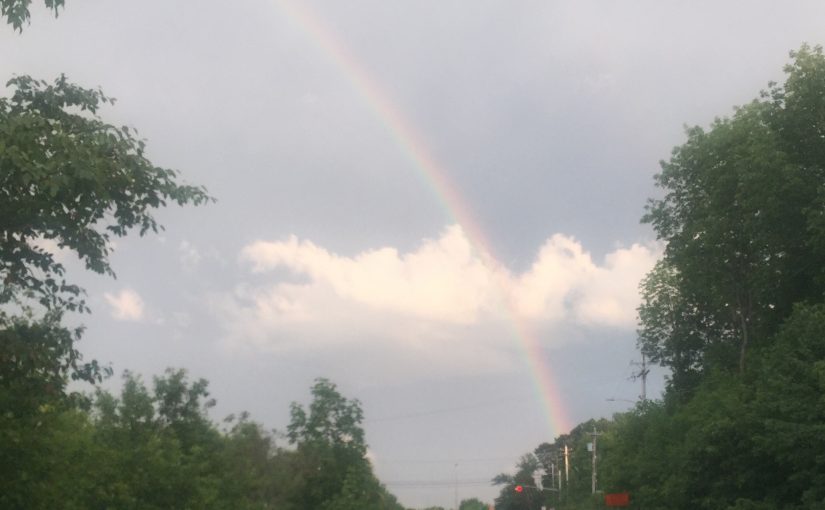 Warning. The following probably sucks, but you might just learn something. I don’t know that I’ve ever tried this from this place. It may not work. I pray it does. The pain and anguish today are visceral things, the fear so real it is transcendent. If I can turn it into something shared, perhaps a little of the load will shift. Doc one would love to get her therapeutic gloves on me right now. She’s been fighting for months, trying to force me into a physical release, that means crying and I won’t do it for her. I can’t. Yet now, alone, dampness rings my eyes and I can’t stop it. PTSD is the enemy within but not the only enemy within. The burning desire to fight, to push back can be a bigger challenge. It’s like trying to chase a rainbow, but really believing you can and must catch it because you need to touch it to survive.

The enemy within is the most dangerous, and I am that enemy. A thought with the flavour of cliche at birth. Trite, I guess. Sorry. I’ll blame 5FDP, Five Finger Death Punch, their pseudo angst blares at me from the speaker today. Shouldn’t blame the Vegas 5 though. The angry music and this writing practice are weapons aimed at the blackness pulling me down. “Once upon a time I saw I had a heart, long before the world I know tore it all apart.” Hmmm, perhaps not. “Once upon a time there was a part of me I shared, years before they took away the part of me that cared…. I don’t know where I’m going but I sure know where I’ve been.” Fuck me, that shit feels real. Jesus, Jessome you are indeed in a deep hole today.

The thing of it is, the truth of the thing, I tossed myself into this particular hole willingly. I set out to prove to myself that I could face the demon on its own terms and stare him down again, as I’ve done so many times in the past. I immersed myself in a very real trauma I’ve been exposed to, studied it intimately and alone. Examined every second and the actions I took at the time. Worse, I did it in the name of journalism again. A close look at something I’ve been asked to report on again. I agreed, knowing I should not, doctors have told me I can never be me again. I can’t share that part of me as 5FDP put it. Fuck them and fuck it. It’s what I want, I need. To report.

Grow the fuck up Jessome; you can’t. Get over it shithead. “I’m not an idol, not an angel, not a saint. I walk alone I always have I’m not ashamed.” Ahh, but I am. The Vegas poets got that wrong. The tangled truth of that thing is, I am ashamed of everything I ever did and yet I know there is absolutely no shame in it. The shame is that in the end it ran me over like a freaking freight train, and left me here unable to function. In that too there is no real shame, except the shame I feel. The enemy within.

“It’s how we live that defines us.” Okay I’ll take that pearl from the band. I believe I’ve lived well, but now I am not so sure. This is the best, the most I can do. This helps some, and pisses some off. I am sometimes among the former but often among the latter. “It’s okay to lash out.” Ivan tells me. Maybe, maybe not. I can’t lash out at PTSD. I’m tilting into a laughing and willing windmill. “My heart’s an endless winter, filled with rage. I’m looking forward to forgetting yesterday. It’s all gone cold.” Indeed Ivan, that works. But that windmill laughs even louder as it watches me charge, fist raised in rage, and slam myself once again into its barbed blades.

So what trauma did I slam myself into this week. Why the hell does that matter so much. I rarely venture out anymore. But when I do, people will ask that question. What caused your PTSD. Jesus, really, what the fuck didn’t. Decades of exposure to things that can never be un-seen, close examination of the rawest of human emotions, fear, rage, regret, loss all at their most extreme. All while never feeling, never allowing feeling. I was stupid, arrogant to the point of hubris. I believed I was bullet proof. That’s what caused my CPTSD. That’s the answer I should give. The truth of that…hmmm. Nothing I covered was enough to cause PTSD. The totality of what I covered was much, much too much. A one in a million case Im told. I caused my PTSD.

Well, fuck me and fuck that question. I don’t give a shit what caused it. I just want out. I want to look back into the abyss. No, fuck Nietzsche too, did he ever step on the fragment of a human skull that only a few hours before encased a young man’s functioning brain. No. The desk riding asshole never experienced shit, so who cares what he thinks. I want to jump whole, back into the abyss and do what I do. I want to carry my pencil to hell and come home again. Every soldier or first responder I’ve met on this journey feels exactly that way. Those who have healed say they no longer feel it. I don’t believe them, because sometimes I say the same thing and it’s bullshit.

I’m not sure why I set out to do this today. I wanted to ease the agony and dry the tears that welled. I guess I’ve done that and replaced them with rage. Another question asked of me in the past week by an intelligent human I admire. He was shocked when I mentioned rage and asked if I ever felt actual rage. Uhm, yep. Sorrow, yes, terror, absolutely, guilt, yep. But if you think a single soul with PTSD doesn’t inwardly rage against it, agonize and search for the self, well you don’t get it. An American soldier with PTSD died since I began writing this self serving post. Yes, a statistical anomaly worked out factoring in the number of veteran PTSD related suicides.

For that reason. To share that reality, and that reason alone, I will allow this to be posted. That soldier raged alone too long. No one saw or understood the rage that consumed him or her. No one understood that at times their fear, sorrow, and pain were visceral things, were transcendent.

I’m not comfortable pulling the curtain back this far. But, like I said. Fuck me. Maybe it’s time to go back to Metallica.