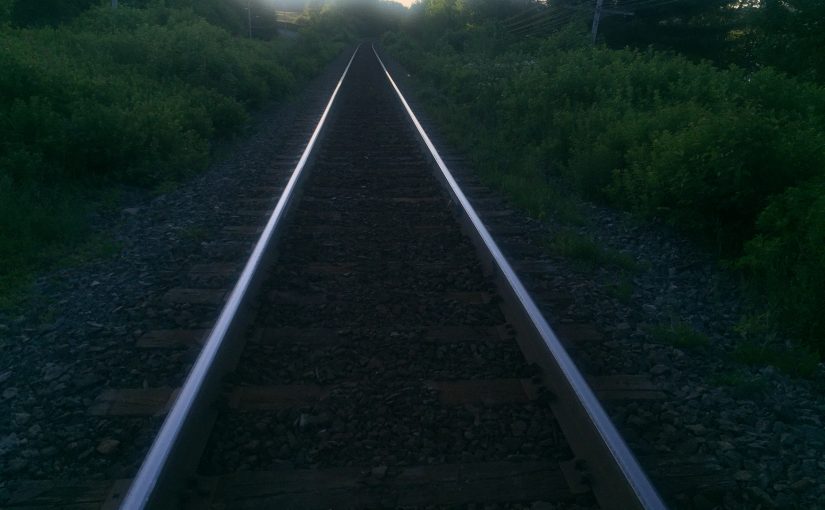 I’m standing on a rail bed looking down the line into the dusk of another PTSD shrouded day. I was blindfolded and twirled around a few times after the train left. Now I stand staring at the rails and wondering. Do they lead back to the things I am trying to escape, or do they lead forward into the unknown. There is no hint, no sound of a train fading in the distance.

The only chugging I hear comes through the right wrist of James Hetfield as he drives a steady rhythm into the strings. The lyric he is screaming over that driving rhythm is “You’ve reached the end of the line.” How does that even happen. I guess he planted the metaphor of the rail line in my mind as I began this post. To think otherwise is to suggest Metallica is a metaphysical force in my desperate search for sanity; showing me the way back to the sense of self that PTSD took from me. Ahh, but what if Metallica is–that and more. The poet Hetfield is calling out “show your scars…what don’t kill ya make ya more strong.” Did I say poet. Yep, he’s the head banger’s existential poet. More on that later perhaps.

There is a point to be found here that some of you may find helpful in your PTSD journey, I know it will help me. Always does. Since this is the first blog written in and for my new web space I should perhaps explain the process for newcomers. This is a form of writing exercise/therapy I started on Facebook. Now it has its own home here.

For those who wish to follow as I seek “The day that never comes”; new lyric, new song. These blogs are a writers version of a HALO. Instead of enemy territory our jumps take us into my psyche as I battle PTSD. A HALO is a high altitude low opening jump, usually carried out in the dark. It’s a long free fall into something you know is there but you can’t see yet. You need faith.

My jumps begin when the angst and terror build to a level I can no longer contain. I start with the selection of a Metallica album. I let the music and the lyrics guide my thoughts through the free fall into the place I need to find, the place of the quiet mind. Songs written long ago guide my pen today and in guiding my pen they guide me.

Why Metallica? On cue an answer comes at me from the speaker where Hetfield vows to “hunt you down all nightmare long.” Nightmares indeed. I am left asking who else? My flame-out started with a Skynyrd soundtrack, but after I kept slamming into the ground in one ugly crash after another a young doctor pointed out the need for a parachute. She told me to use Metallica as a shield against the outside world at first, and then later as healthy channel for PTSD’s white hot rage.

The first half of the prescription works. Metallica fills my earbuds in the waiting room of the doctor’s office, or anywhere else I must go that pulls me from the relative safety of my home. Being locked behind the wall of music in my head is like being inside a bubble. Nobody approaches me, and no sudden sounds cause me to leap to the ceiling like a cartoon cat.

The second phase of the Metali-therapy is perhaps more important because self directed rage is a dangerous mother indeed. I left my guitar in the weeds more than a decade ago when I began running from myself in the opening bars of my PTSD-avoidance dance. Now, armed with a James Hetfield style guitar and a small box of his signature picks, I am trying to learn some aggressive Metallica tunes in order to channel that rage in a healthy, albeit noisy, direction. We shall see how that works.

“How can I be lost, if I got nowhere to go?” Laments Mr. Hetfield from the speaker. A gentle nudge, moving me toward the bullseye of this particular HALO. I am lost. I hope this web space is the place where I must go. But to what end? The good doctor did more than recommend the music of Metallica, there is a book. I was reading too many psychology texts and she wanted that stopped. Instead, I now study philosophy in search of direction. “Metallica and Philosophy” is actually a text book and it is helping. Yep, they teach that stuff. It is that book that spun me in circles on the rail bed before pulling off the blindfold. I must tread carefully now, the paths appear identical. A rail bed is a rail bed. The fear that cloaks every decision in this PTSD reality is urging me to find the way back to the familiar. A potentially fatal decision Mr. Hetfield points out as he sings of “My Apocalypse”. To move away from the old is to move toward the new me, who ever and what ever he will be.

Here’s what has me venting today. I stand between these steel rails with every reason to feel joy. Crime and mystery publishing icon Otto Penzler, and his Mysterious Press label, have taken my first two books Murder at McDonald’s and Somebody’s Daughter and turned them into eBooks. As of this date those old books enter their new life and are available world wide. My new book, my first attempt at fiction is getting positive initial reviews and will be released at the end of the summer. I have my own web page built to promote those books and help people to understand PTSD. Exciting times, but for me an emotional flatline. PTSD has robbed me of the ability to feel joy. It’s more of an echo. Like a distant train whistle in the night. For now, I’ll move down the tracks in the direction of that distant whistle and hope I bump into the new me along the way. Feel free to join me. More to come.