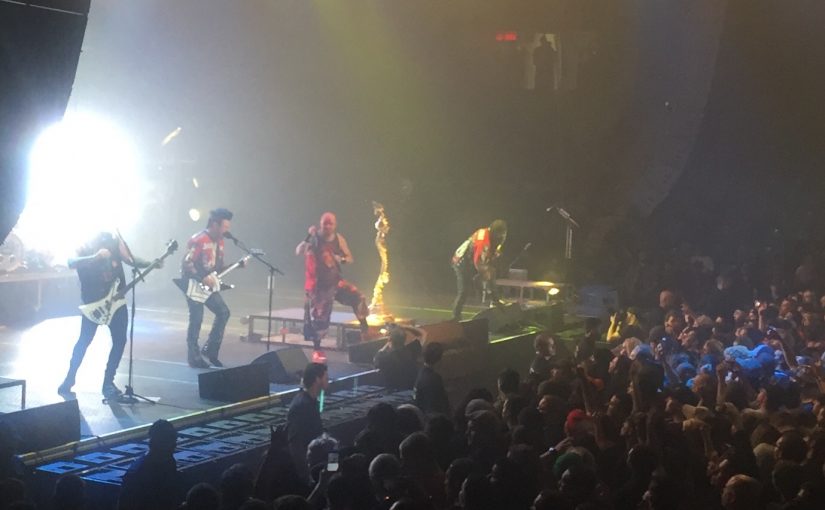 “I’ve been thrown down, run around, beaten till I hit the ground.” I feel that Ivan. We have Five Finger Death Punch in the driver’s seat for today’s metallog. As we should, 5FDP is part of the problem. “Help me to fly away, lift me up above the broken and the empty, lift me up and help me to fly away.” Indeed Ivan, you may have.

Let’s back up twenty four hours. I left home yesterday on my first road trip in over two years and I did everything wrong. Yet, I sit here in Saint John this morning knowing if the choice was to do it again the wrong way today or not at all, I would do it again. I’m being dangerously reckless and I don’t want to stop.

“I’d give anything just to watch you bleed.” Not that reckless Ivan, but close. Actually maybe that reckless. As I continue on the detox from the meds I am becoming more and more impatient with PTSD. I don’t want it, I don’t want to nurture myself, care for myself or acknowledge the god damn thing in any way. I set a course yesterday that forced me out of all safe parameters. I used 5FDP to do it.

So how does that happen. A little death punch history. I discovered the band four months ago doing research for my next novel. God that sounds pretentious, but I stopped in at two Coles stores yesterday and there was the first novel up on the new release wall in both, so I guess I can say it.

“You can’t take it, you just fake it, you are just in my way. I don’t give a fuck about you.” Cold Ivan but true. I do feel like I’m faking it on this whole book tour. I’m not worth of the title author, let alone novelist. I’m a broken and burned out soul. On the scrap heap. ” What, stand the fuck up. I don’t give a fuck about you.” Sometimes these exercises scare me. Okay Ivan, I’m trying to stand up.

So, back in May I created a character in the next book. He’s a soldier with a 5FDP obsession, so I started listening to his music and let it filter into these metal logs. At the same time I was booked to read and speak at the Fog Lit Festival in Saint John to promote my book. Within a month my music therapy instructor texted me to say 5FDP were touring through the region. Turned out they’d be in Moncton on the day I was driving to Saint John.

I thought I’d be better by now, so we made a date to see them as a form of music therapy and a perfect chance for me to properly research the band. “I’m not defending, downward descending, falling further and further away.” Not defending Ivan, but making excuses yes. And maybe falling off the point.

My doctors spent time preparing me for this road trip, and I never mentioned the planned side trip to a death metal concert. The rules the docs set out were simple enough. Always have a plan B and C. When you suffer from hyper vigilance you need to know you have options or your symptoms escalate exponentially. So instead of leaving home for Saint John yesterday I left home for Truro, I decided I would go to Coles there and sign some books. After that I said okay. I’ll go to Coles in Amherst and do the same thing. Simple mind games. No big commitment of three days away from home, just hour long drives to the next book store.

I fooled myself and was relatively calm. After Amherst I got the text from my music therapy teacher, he was on the road behind me and wanted to meet up for the concert.

“I want out, but I could never surrender, try and break me down but I won’t let you win, you can call me out but I know you’re a pretender.” True enough Ivan. My mind game was over. I was busted. What the docs taught me was gone. I painted myself into a no surrender predicament. I was committed to Moncton and a death metal concert before ever getting to Saint John. All in the name of research right?

God this seems so trivial to write, but was so difficult to live through. Big deal, I drove from Halifax to Saint John and stopped in Moncton for a concert. Yet it was a big deal, an ordeal I barely survived. Let me describe that.

I was so terrified of nothing by the time we hit Moncton we couldn’t even go to supper, we sat in the parking lot in my Jeep waiting for the doors to open. I shook, he tried to talk me down. My soul was screaming. Run, leave, get the hell out. But why? Hyper vigilance, that’s why. It’s that kind of real. “I’d rather be anywhere, anywhere but here.” Well yes Ivan exactly, but there was nowhere else. He drove from Halifax to attend the show. I couldn’t say sorry I’m leaving. I had perfectly placed myself into a no out scenario, exactly what the doctors said not to do.

It was a four band show, great deal right. Wrong. Half way through the second band, the screaming volume, flashing lights and howling crowd were just too much. I had to leave my seat and go for air. I went outside and got sick. A small group of people in Moncton think some loser got too drunk during the opening acts to enjoy the real show.

I bought a Gatorade at the concession stand and returned to my seat trembling. “Everybody hurts, everybody bleeds, everybody bends to feel a need. Everybody’s born with their own curse and I’m not alone.” Shit yes Ivan, exactly. I ran a mantra through my head as I gripped the armrests on my chair during the third act. Suck it up princess. This isn’t real, this isn’t you. You’re at a concert, stop being a God damn drama queen. I don’t want PTSD anymore. Please take it back. Yeah, that was part of the mantra too.

” I just can’t compromise, apologize, there’s nothing you can say.” There is a lyric loaded with a heavy truth. Nobody can say anything to make me go easier, I can’t and won’t compromise. My new specialist says deep down I am refusing to accept the truth of this disorder. Well, she’s right. I don’t. I won’t. Coming off the meds is making that painfully clear.

The Death Punch five were spectacular. They stormed the stage, absolutely owned it and the crowd. Full throttle start to finish, good work Ivan. It was strange. Music pushes you to emotional places, I was overwrought to begin with. I teared up during a mid set tune. I’m still not sure if they were tears of joy because I was watching a band I want to study for my next book; because I was working, I had purpose. Or, if I was just spent from the emotional effort it took to get there.

“I still have so much hate inside of me, seems like you were just waiting for me to fail.” So there is the truth I’m seeking today Ivan. I hate the part of me that has PTSD and I did set it up to fail.

But to hell with that. I have a better sense of 5FDP and the character I am creating for my new novel will be better for it. Damn PTSD and damn the doctors with their self care preaching. I don’t have time anymore. I’m no rock star Ivan, but it’s time to storm the next stage of my life and own it. It’s only rock and roll.