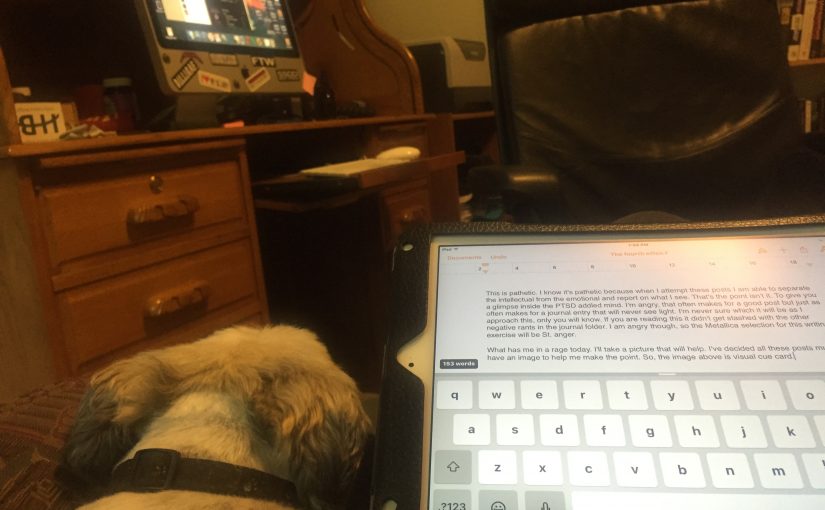 This is pathetic. I know it’s pathetic, because when I attempt these posts I am able to separate the intellectual from the emotional and report on what I see. That’s the point isn’t it. To give you a glimpse inside the PTSD addled mind. I’m angry. That often makes for a good post, but just as often makes for a journal entry that will never see light. I’m never sure which it will be as I approach this. If you are reading this, it didn’t get stashed with the other negative rants in the journal folder. I am angry though, so the Metallica selection for this writing exercise will be St. anger.

What has me in a rage today. I’ll take a picture that will help. I’ve decided all these posts must have an image to help make the point. So, the image above is visual cue card. It shows the world’s worst, and best, PTSD dog snoring beside me as I type on my iPad, a metre from where I want to be. I’m in my armchair with my feet in my office chair. One metre away sits the writing tool I love most. I want to sit there and work on some real writing. I need to– if only to justify the oxygen I continue to consume. My guitar is two metres in the other direction. That would be useful as well. But I might as well be sitting in a vat of crazy glue. Had I not been reading an article on my iPad this wouldn’t even be an option. Mr. Hetfield is calling for my attention.

“Fuck it all, no regrets. I hit the lights….St. Anger round my neck.” Yells our thrash metal choirboy. I don’t think I’ll regret these posts. Shit, they’re all I have so probably not. But, “I want, my anger for myself,…I want my anger to be me. And I need to set my anger free.” Seems I picked the right album. On regret, it is not in anyway my intent to elicit sympathy here. God no. Understanding of the beast, that’s the goal. To tip the scales into self centred poor me-isms, would suck. No, I just want to give you a taste of PTSD from the belly of the beast itself. Your understanding will help you deal with people who have PTSD and help them immensely when they are around you. “This is the voice of silence mo more.” Hetfield sings. That’s the general idea I guess.

On regret, I have closed off the comments section because I am not in any shape to juggle vetting comments at the moment. Those of you who know me well, know how to reach me. The contact area on this website reaches me if its not a flame you are throwing. So good friends, if I am coming across as a self indulgent, woe is me, whiner, for Gods sake reach out and slap some sense into me.

“Some kind of monster, this monster lives.” James is putting me back on topic. So why ignore the computer or the guitar in the room Jessome? It took me a long time to find that answer. Early in treatment I was repeatedly warned about the constant fight or flight response triggered by the flashbacks, or just by oxygen. Okay that may just be self indulgent. You see how my voice gradually emerges as I work through one of these. It does work.

So, early on I was given tools to battle the fight or flight adrenal tsunami. They don’t always work — why? Well, recently I read a book about CPTSD, which is my diagnosis. Turns out there are four F’s, not just fight and flight. The third is fawn, kind of a Stockholm syndrome thing where you try to make friends with the attacker so you won’t be harmed. Not applicable to PTSD, ahh but number four — freeze. As in deer in the headlights frozen.

“I’m judge and I’m jury, and I’m executioner too.” Well, if that’s the case I find myself guilty of falling victim to number four far too often. I’m locked to this chair immobilized by fear. But, I know there is nothing to be afraid of. It’s maddening, pardon the obvious pun. The physicality of fear is more powerful than that of any other emotion I’ve experienced. I know it is a subconscious fear of something that happened long ago. That said, I am frozen in its grip now because I did not acknowledge or fear it then. Piper paying time.

When I freeze, I stumble back into the black hole of depression. One of those, also-included-bonus-conditions that can accompany a severe CPTSD diagnosis. I’m okay with that. Knowledge is power, and as awful as it will be, I know this depression is about nothing. Just like the fear. Hell I have everything to be happy about. To be depressed now would show I don’t appreciate what I have, right. Wrong. Depression doesn’t need a specific cause, it can come along when everything seems perfect. It doesn’t care if it makes you look like an ingrate.

It doesn’t care that this has been a fantastic week for me. That my old books have been put out in eBook form by a major New York publisher. It doesn’t care that I have a website of my own now, nor that I picked up an actual copy of my new novel this week, nor that it sits on my coffee table with Dr. Seuss. It doesn’t care that this weekend marks the beginning of a test, that I am home alone to try to write, to try to function on my own for a week. You know, like a grown up. Depression does not care. It’s like Mother Nature, or flood waters. Our plans mean nothing.

“The motherfuckers got in my head. Trying to make me someone else in stead. It’s my world now.” Mixed message there James. “It’s my world, you can’t have it.” Oh, I’ll buy some of that. Seriously rules of the writing exercise aside, the motherfucker did get in my head. I’m frozen in terror and sliding, or free falling, down the vertical slope into the well of depression. I don’t know how long I will stay down here. Not my call. But, I do know I am going to keep coming to this chair until it passes and I can move into that other chair. Or grab that guitar.

I said something a moment ago that may carry insight, and may be reason enough to post this rather self indulgent spiel. Forgive me the self indulgence, full refund guaranteed if you didn’t like the post. Okay, I said depression doesn’t care that it has been a successful week for me. That’s not true. According to Doc 1, a big part of the C (complex) in my diagnosis is tied up in the feelings triggered by the potential for success. You see, some of the best work I’ve done in my career has exposed me to some of the most horrible or dangerous things I’ve seen over those 35 years. Always followed by an attaboy. Good job, now off you go again.

So, now if I feel success is near, or that I’ve done something well, I don’t feel good. I lock up in fear and eventually sink into depression. It seems the potential for success or that feeling of a job well done is a booming echo of trauma. PTSD can be that slimy. So, here I sit. Intellectually I know everything is okay. Emotionally, I’m on a wild ride that will eventually end. It’s not that I’m not grateful for those things that happened this week. It’s just that they scare me all the way to that fourth effen F. I’ll ride it out here.