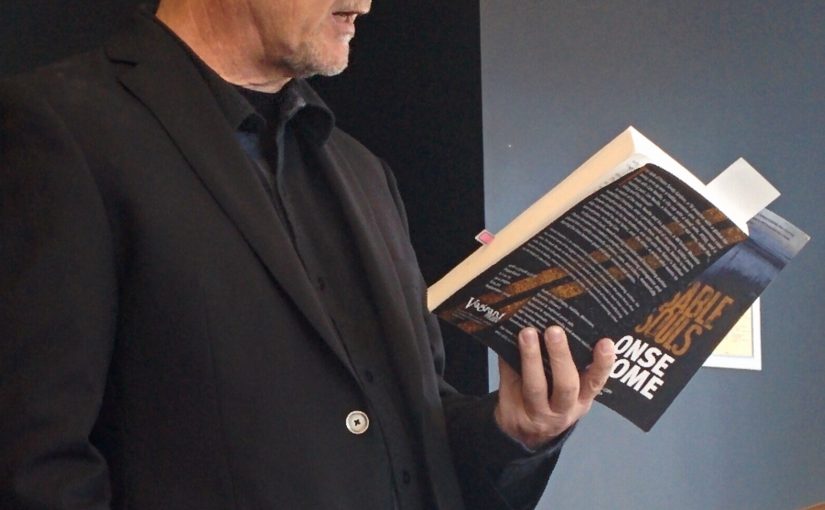 It’s two thirty in the morning. I’ve been up for an hour now and I know I’m going to ride out the dark side of this day. It happens. My chest is hollow, my breath coming in tiny sips like I’m breathing through a baby’s plastic cup. My pulse is racing and the adrenaline is coursing through every cell at 200psi.

I’m having repeated violent flashbacks that I can’t turn off. They are real; moments I lived through that could easily have gone the other way. Times when there was a very good chance I wasn’t going to make it home from work. In reality in most cases I managed to talk my way out, a few got physical but nothing much more than a punch in the head or a shove and kick, a gun aimed in anger but never fired. Things I ignored then, but that are flooding me now. I want with everything in me to go back and fight, I want to fight anyone right here right now. I crave violence. That’s hyper vigilance.

“I’m taking all the blame, resent what I’ve become. I regret everything and there’s no where left to run” sings Ivan as 5FDP drive the beat and tone of this exercise. They channel anger better than most, maybe better than Metallica. Rage is what happens when fight or flight is fully triggered and there is nothing you can do to contain it. It’s why so many terrible things happen to people with this blasted disorder.

“I dare not say what’s inside of me. Right between your eyes, no where to hide. Click clack, reload, click clack, unload.” Well that’s dark Ivan and it’s not on the menu, but I’d be lying if I said it wasn’t roaming around in the thick black smoke of self hate and anger. I have no intention of going near that topic or that shotgun, I’m hear to dig my way out of hell this morning. “Life ain’t on your side, you’re out of time, click clack reload click clack unload.”

Time for a new song. These metal journals follow a pattern. I write what is eating at me and keep my left brain occupied listening for lyrical cues to riff off of. It’s my own play on James Pennebaker’s trauma writing program. It works for me. By keeping left brain busy logic, fear, common sense and self editing don’t play a role. “Who cares any more, who’s there any more.” Maybe someone, maybe no one. But that’s not the point Ivan. These journals are my own lifeline. I share them, only because I made that commitment in a heavily medicated state and people now ask me to do so. They can be maudlin, except the truth can’t be, can it. They are raw and they are true and they are where I am, as I write free form with nothing more than a rough word count in mind.

“I don’t mind admitting I’m to blame. I care no more I can’t bear no more.” I am to blame for this episode. I staged my own perfect storm. I finally got to meet with a specialist on medications and she reluctantly agreed to taper me off all meds so we could regroup and I could decide if I believe being terrified but functioning is better than being frightened but catatonic. She advised against the move but said it is her policy to follow the patients wishes. She was worth the wait.

Anyway I’m detoxing on a slow titration but the physical and mental symptoms are pretty severe. The articles say to do it over a period of months and to be in a quiet place with little to no stress. Right. I’ve decided to detox as I add pressure to the mix and force myself from my home to promote my book. Public appearances, media interviews, road trips away from home for days at a time. Yes I know, poor me.

” I’ve been walking over graves, carving out headstones that I own……I’m dead and gone….now I’m digging my own, digging my own grave. Is there peace beyond the rage.” Ahh Ivan brings me back to the drugs. That is exactly how they made me feel. Already dead. What’s the point in living if you are so medicated you don’t remember where you’ve been or what you’ve done. Please don’t follow my lead. I’m doing what I need and I’m doing it with medical supervision and it’s not going well so learn from it but don’t try it alone.

“Letting go of everything looks better down on paper, letting go of everything. Not until I’ve met my maker.” There it is Ivan. On paper this is a good plan. Living through the “discontinuation syndrome” is hell. It’s riding the chair with the headphones on at two in the morning filled with violent flashbacks and fantasies. At the core I’m a simple man. I know what I want and it doesn’t include being drugged. I suffered through this thing for more than a decade drug free. Granted it’s much worse now, but I must find my way back there.

This week has been hell, a week when that click clack, unload, sounds so much like a beautiful song calling to me from the darkness. I know that’s the drugs leaving my system and not me, because as strong as the pull may be at times it is not what I want. I know that.

I’ve been outside dressed like old me, reporter me. Smiling and greeting people, reading from my book and signing copies, always quick with a joke or friendly comment. Always ignoring the blood boiling rage and bone freezing terror just beneath the thin crust. “This is my war, war. I never wanted anything more.” It is very much a war and this is how I fight it. I go out into the world wearing the reporter suit and swallow the terror brought on by the people the noises the strange places. The constant fear is the enemy shooting at me in this war but I must meet the enemy on his field of battle. “We have nothing to fear but fear itself” right.

“One day the shadows will surround me, some day the days will come to end, some time I’ll have to face the real me, some how I’ll have to learn to bend.” I swear sometimes these exercises scare me. But there it is in a lyric from a song I don’t even know. “One day I’ll face the hell in side me, some day I’ll accept what I have done. Some time I’ll leave the past behind me, for now I accept who I’ve become.” Maybe I should just listen to this song. But that’s it in a distorted guitar driven anthem. I will have to face me when this is over. My time will come click clack or not. When that happens I want to be able to know that I tried and didn’t shy away from the hard parts.

I don’t know who I am any more. Am I the guy who wrote Disposable Souls and will go to Saint John promoting it next week. Am I the basket case writing in this public journal at three in the morning. Am I both. If I am both how do I find the balance that lets me be both. I’ve wanted to be an author as long as I can recall. It’s why I became a journalist. As life would have it, I played journalism the hard way and seriously damaged my soul. Now as my opportunity to live a part of my dream arrives, I am torn. It terrifies me but it is what I want. The price I guess will be sleepless nights and a white hot rage when I return to the safety of home. It’s as though my CPTSD resents me stepping out into the daylight again after two years of solitude. It liked being in complete control and is fighting my effort to gain something back.

I’ve blown past my word count but I think I know why I am going through this terror and rage this morning. I took the last of the strongest of the pills a few days ago so I am feeling that bounce back effect they warned me about. But more importantly, despite a caring e-mail from doc one advising me to curtail my book launch events now and just recover from the detoxing for awhile, I know I will go to Saint John and don the reporter suit again and rock the reporter, no the author, role again. I’ll pay the price when I get home. That’s fair. Click Clack, unload.