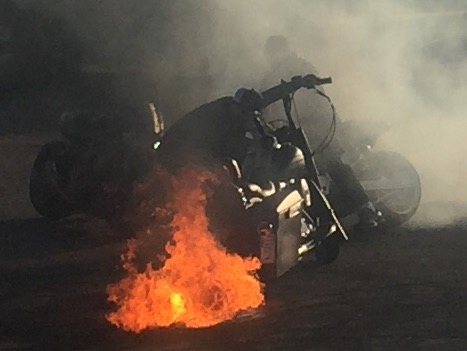 “This wasn’t meant to be a love song. Matter of fact this one’s about hate.” We have 5FDP thumping through the headphones this morning. It seems Ivan is setting an angry tone. In fairness, I only reach for the Vegas death metal madmen when I’m in a dark space, and Ivan is right, this one ain’t a love song. It’s about how I became such a burnout. Truth is I should have seen the end coming the last time I was smoking the ass off my bike.

The day I destroyed my Harley I was doing a rage induced burnout. I shoved full throttle power into the rear wheel as I forced my boots into the pavement and held the front brake locked. The rear tire spun sending a cloud of white smoke into the air as the bike vibrated and rocked as though floating on air between my legs. There was a sound just beneath the roar of the overworking engine. I’m enough of a wrench to know a fatal sound. The metallic snap pop of engine pre-det. Explosions blasting in the face of the pistons as they race toward the combustion chamber.

I heard it, knew what it meant, but I kept that throttle twisted. I started walking the bike in a circle as the rear tire spun making a thick black crescent in the road. The sound was deafening the acrid smoke was so thick I could taste it. The smoke didn’t explain the tears. I pushed my beloved bike until it blew up between my legs. I was close to home and rolled it there and took it apart. It’s still in more than a hundred pieces in the garage. The engine can’t be rebuilt it’s terminal. Like me.

“You can’t convince me to change, we ain’t on the same page. I had my fill now there’s nothing but rage. Best get out of my way cause there’s nothing to say. Is that all you got cause I ain’t got all day.” Fair enough Ivan, to the point. That burnout was done out of a deep anger because I had lost control of my emotions. I was seeing and hearing and smelling things constantly. Awful things and I couldn’t turn it off.

“I spoke to God today and she said she’s ashamed. What have I become, what have I done. I spoke to the Devil today and he swears he’s not to blame and I understood because I feel the same.” What I’ve done Ivan, is allow PTSD to win. I surrendered my beloved bike to the beast and still it wanted more.

I was more of a basket case at the time of that burnout than my bike is now. A few days later I was negotiating with a doctor. The prescription was no more serious journalism. I said no. I only agreed to enter treatment on the condition that I continue the job I loved. I lasted seven more months before I was sprawled beside my bike in pieces. Then I did everything the doctors said, including take way too many pills.

“My heart is frozen, my soul’s been broken. The whole world’s on my motherfuckin shoulders and I can’t seem to control it. I can’t contain it and I just don’t give a shit.” Over stated Ivan, but exactly. The drugs left me frozen and broken but ignorant of the state I was really in. The rage that drove that final burnout never left, but like Ivan I decided I couldn’t contain it and I didn’t give a shit.

“Don’t get any closer or you’ll meet the real me. I am who I am, you can’t describe me. I am what I am you can’t deny me.” Meeting the real me is the point now Ivan, it’s why I am going against the doctors suggested best practices and giving up the strongest of the meds. She’s supervising it but not supporting it. I get that. But I can’t live frozen and broken. If there is any lesson to share out of this rambling drivel today it is in the value of trying to break through the fog of anti psychotics and accepting me for the burnout I’ve become.

The angry music, the heavy lyrics and pacing are making this metal-log difficult. I think it will end up in the delete folder. Maybe not. I’m trying to find the root of the new fear and white hot anger. If I get there I’ll share.

“Some say they have the answers, some say they know the truth….if there was no tomorrow, if there was just today, would you make different choices or would you stay the same.” Bingo. Thank you Ivan, glad I brought you to the party. There is no guarantee of a tomorrow and yet here I sit on the sidelines waiting for the clock to tell me to take another pill so I don’t crack up again. That’s not living, not even existing. I am not advising anyone suffering from a serious mental illness, or any other illness, to stop taking medication. It’s just that I’m a thick skulled Pier Boy who is so ashamed of the tail-between-the-legs-burnout he’s become that he’s willing to risk a return of all symptoms if it means some kind of life beyond this artificial reality.

“There ain’t nothing in this world for free. There’s not a man, not a man I believe. Give a rats ass what you think about me.” There’s truth there Ivan, there’s not a man, or in my case a woman since my medical team is female dominant, that I believe. I refuse to believe this is it for me. I was a high functioning, fearless reporter who would never take no for an answer. Now I’m a non functioning chair surfing burnout. I just can’t accept that. I’m trying to prove to myself that I can be terrified but still function, like in the bad old days.

But now I’ve stopped sleeping, I can’t get more than three or four hours a night. Not enough. Is that the reduction in the drugs or the building fear. I’m afraid the latter. You see I’m on the verge of the biggest test of all. I hit the road alone tomorrow for a three day road trip. Another one is set for next week. The guy who tried to tear a hole in the pavement with his Harley is afraid of the open road. It’s a genuine trigger, I spent countless hours on hundreds of road trips alone in a vehicle rushing to something horrible.

That was the job and in the final months of work, just driving on highways brought the terror to the surface. Ahh a whiff of self discovery at last. The public readings and book signings I’ve been dreading do intimidate me, but it’s the white knuckle drive to New Brunswick and then Cape Breton that has me in the armchair every morning at two. I’m afraid of my own truck. Like I said, burnout.

It doesn’t matter though, I’m going to grab that wheel and hit the highway again. I have to reclaim it. Who knows maybe someday I’ll do it on a rebuilt Harley with a rebuilt rider. Maybe this one is a love song Ivan.